Gem proves her worth for Skyla at the National Championships 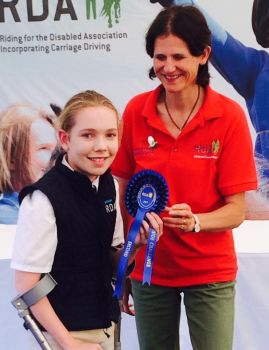 Skyla Harris gained at second place competing in the Coutryside Challenge on her own pony, Gem, at the Riding for the Disabled National Championships, Hartpury, Gloucestershire. The competition was very strong with Skyla and Gem completing a foot perfect round to put them into second place with a score of 83%.  This was Skyla's first time at the RDA Nat Champs which take place at the impressive venue of Hartpury College near Gloucester.  Skyla's mum, Anita, was delighted with the result and thanked Kesteven RDA for their help and support especially coach Sarah Harris for taking Skyla round the course.